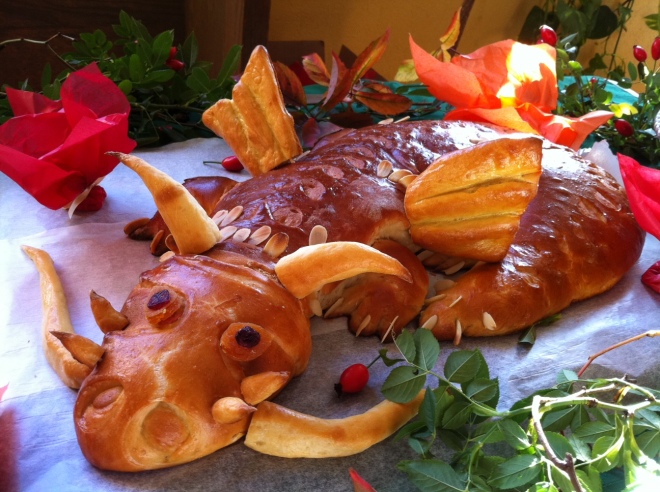 Today we participated in an annual tradition at the girls’ school – the Michaelmas Celebration. This event celebrates the slaying of the dragon by St. George, and is honored each year by grades one to four, with each grade playing a significant role in the pageant. The reason for the tradition was explained to me today, and as usual, really resonated with everything transpiring here in Schnooville.

Michaelmas is a time to look inward and prepare ourselves for the darker coming days of autumn and winter, and for the dragons that await us. It’s about gathering our courage and our faith and facing our beasts to emerge triumphant. It’s the Autumnal Equinox “Festival of Strong Will” according to the Waldorf Tradition.

We were charged (and by ‘we’ I mean my man) with baking the traditional Dragon Bread that is shared after the pageant with the entire school. Dragon bread is exactly that – bread shaped like a dragon, and thanks to a not-so-hilarious scheduling mix up we thought the celebration was on Thursday. Fortunately my guy caught the error, but the result was him staying up until 4:30 am shaping bread into dragony goodness. What an amazing daddy.

I was in Hamilton with my parents and my brother, and had intended to stay the night, but I rushed back because I’d promised my daughter I’d be there to see her deliver her lines (grade two means she’s a gnome now), and she was immensely relieved by this. In Hamilton I was in the midst of my own dragons. Well, I guess they aren’t exactly mine, but they certainly are breathing down my neck.

On Monday we learned that my mom has stage one breast cancer. This was after a nail-biting series of scans and tests, and the cancer was uncovered after a routine mammogram. Ladies everywhere, do not screw around with your paps and your mammograms. It is simply not worth it to let these things go undetected.

If you’ve been reading this blog for a while, you know that the big “C” is a big fat jerk who has taken two of my aunts (my mom’s sisters) and has also now affected one of her brothers who is dealing with prostate cancer. Now the “C” is at our door, and it simply doesn’t feel real. I had many a sleepless night playing through the “what ifs” and then to have the worst-case news delivered…it’s just bizarre. Truly unbelievable.

Especially because my mom is one tough broad. She refused to seem anything other than herself during my visit. Life seemed utterly normal, and so I just went with that. Stage one at her age and her health is a totally positive success story, and anything other than a valiant battle is simply un-fucking-acceptable. If she’s sticking out her chin and saying “Fuck you Cancer” then so shall I.

It’s scary as shit to have a parent with a serious illness. It’s scary to consider the possibilities and play the scenarios over and over in my big, rambling head, but I’m going to take my cues from the Waldorf kids and from the brave warrior woman who is my mom. My shield will be faith and my sword will be strength and courage.

My family is so awesome. My aunties and uncles descended like storm troopers and my wonderful loves and kids were ready with millions of extra hugs and kisses, and Kleenex and foot rubs. My in-loves (thanks Daniella Aum for such a great term) are sending prayers and love, and my friends are all rock stars who know exactly what to say.

It’s amazing how things that aren’t exactly happening to you are still happening to you. It’s amazing too how life-altering changes always arrive in the fall here in Schnooville. I want to be a rock and I want to be a pillow as required for my amazing mom. Someday I’ll tell you the story of how she took down a pervert who was stalking me in a department store. If she attacks cancer like that, she’s going to be just fine.

The People Have Spoken