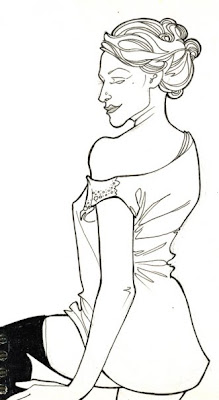 On these kinds of nights, when it is in fact the next morning, and when Anne has had far too much to drink, it is always the same. She carefully counts out the cab driver’s tip, mounts the cement stairs to her door, fumbles with her key in the lock, and tiptoes quietly to her apartment, all of which she scarcely remembers the next morning.

She will likely skip washing the makeup off her face, (except for her lipstick) will very quickly brush her teeth, will peel off her clothes and drop them in a heap on her bedroom floor, and will crawl into bed, shoving the cat off her pillow (he will curl up on the pillow beside her head once she is settled) while switching off the lamp in one fluid motion.

As she drifts towards oblivion, she tries to recall the conversation she was having with that stylish girl who works in PR. She remembers she was in purple silk, but the other details are lost. She tries to recall the name of the boy who scrawled his name and phone number on a piece of paper now crumpled in the back pocket of her jeans. She won’t call him. By her standards it’s been a very long time since she has arrived at this hour with anyone else in tow. She tries to remember if her brunch tomorrow is at eleven, or at noon, and either way it doesn’t matter because it’s only a matter of mere hours before she must be there, well turned out and not smelling like a drunk uncle. She tries to remember the last time she called her mother, which is easier than trying to remember the last time her mother called her.

Her inebriated brain hums and purrs, and sleep takes her gently under the arms and begins to drag her slowly downwards. Soon it is all black satiny silence. She is nowhere now, and this hour of floating serenely in the void will be lost forever upon waking.

She stirs, and rolls over to the opposite side. There is something warm and soft beside her, and it stirs in answer to her adjusting positions. With a lazy roll of her head she opens one eye slowly. Lying next to her is a woman; long blond hair in tangles over her pillow. Not her pillow. Not her bed.

Brushing aside the cobwebs of her sleeping state she is now distinctly conscious of a hand resting on top of her right thigh. She turns over her other shoulder and sees a brunette, wildly curling hair a riot around her head. She is awake. She smiles. Her lips are full and there is a slight gap between her two front teeth. She is curled carefully around a sleeping infant, who is nestled against her bare, ripe breasts.

Anne smiles in return. The brunette reaches out and gently brings the knuckle of her index finger to Anne’s cheek. The blonde sighs in her sleep, and shifts, throwing an arm over Anne. She murmurs something into the pillow and then starts to softly snore. The brunette smiles again.

There is soft, golden light streaming in the window. Not her window. There are white lace curtains, and the sun casts dancing patterns across the white coverlet and across the still figures entwined on the bed.

The room is old, the wallpaper faded, and the furniture looks handmade. There is a porcelain pitcher with a bowl to match on a small stand in the corner. White linen towels with hand-embroidered flowers hang from the sides.

What looks like a pair of white cotton bloomers lay over a small chair against the wall. There is an oil lamp on the dresser; the hurricane is black with soot. A sturdy pair of brown boots with fraying laces has toppled over beside a sleeping calico cat.

Anne feels warm, and safe. She stares into the liquid chocolate eyes of the brunette beside her. The woman takes her hand and brings her fingers gently to her lips. Anne tentatively reaches to tug at one of her impossibly perfect curls. The steady breath of the blonde is hot on the back of her neck.

“You are holy…” Says the brunette so softly that Anne must strain to hear. “You are holy, and you belong to the sky.”

This is always when Anne wakes up suddenly, usually because of the insistent chirping of the bedside alarm, a cellular phone set to emulate sparrows. She lies still, breathing slowly for a moment, aching for the warmth of the bodies beside her. The cat yawns, stretches, and places one delicate paw in the centre of her forehead.

The People Have Spoken